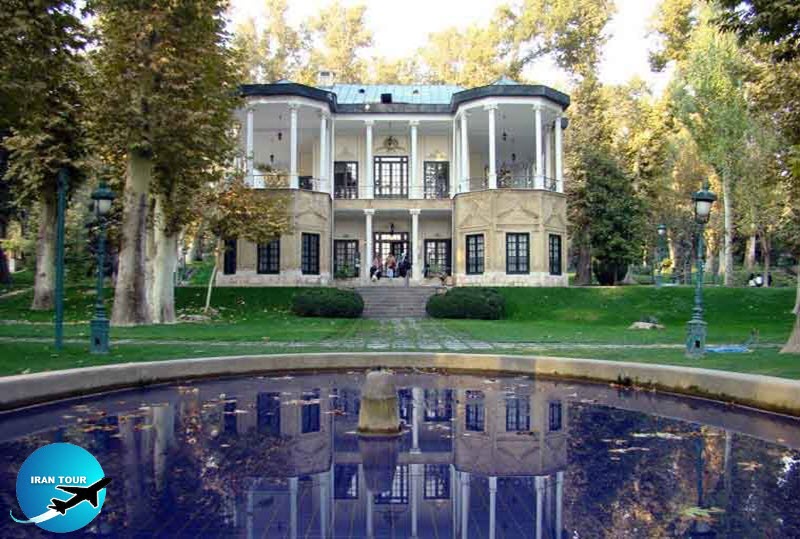 The Sad Abad Palace complex has 8 different by the names:
Gates to the complex

The main building of this complex are:
- Ahmad Shah Qajar Palace

- The Green Palace
(also known as the Shahvand House)

- Museum of Natural History
The Special Palace, currently used by the presidency organization.

- Museum of Glassware and Handicrafts
Princess Ashraf Palace, named after the sister of Mohammad Reza Pahlavi.

-Palace of the King Mother
Currently used by the presidency organization.

- The Military Museum
Prince Shahram Palace, named after the son of Ashraf Pahlavi.

- Museum of Treasure (The Museum)
2nd Palace of Reza Pahlavi, currently used by the presidency organization.

White Palace
White Palace or people Palace is the largest ones of this complex. This palace had been used for ceremonies and official affairs, also was a summer residence for Mohammad Reza Shah (the second king of the Pahlavi dynasty) and Queen Farah. It is made by the order of Reza Shah the first and most famous king of Pahlavi dynasty in 1932 and completed 1937. But it was actually used three years later. This is made and decorated by many of the best Iranian artists and engineers. This palace is built in a surrounding area of ? square meters; It is a two-story building and a basement with a total area of ? square meters. This building has 54 units, including ten large ceremonial halls which were the official reception hall of Mohammad Reza Pahlavi. The biggest room of this building measures 220 square meters and served as a dining room.

Fine Art Museum
Fine Art Museum is a splendid building of Sadabad complex which was used as the royal court during 1968 - 1979. It was opened as the “Fine Art Museum” in 1983 which has attracted many art lovers. This building is laid in the southern part of Saad Abad and is a three-story building with 3600 square meters. There are numerous beautiful paintings with western and eastern styles on display for our dear visitors. This gallery consists works by recent famous Iranian painters such as Sohrab Sepehri, Hossein Mahjobi, Faramarz Pilaram, Hossein Zende Roodi and miniature paintings by Master Hossein Behzad and Kelara Abkar and also there are paintings by Iranian artists from Safavid era(1501-1722) to Qajar era (1794-1925). In the other parts of this palace, there are western style paintings from 17 to 20th century. Some of the painters are Salvador Dali, Peter Graham, Ivanovic Shishkin, and Joule Berton.

Green Palace Museum
Shahvand or Citizen Palace, now called Green Palace, is one of the most beautiful palaces in Iran. This palace is located in the highest and northwest part of Sad Abad complex. The Green Palace is renovated and also redecorated (1923-1929) by the order of Reza Shah and under control of "Mirza Jafar Memar Bashi" the most famous Persian architecture. The exterior view is covered with rare pearly green stones from the province of Zanjan and was therefore called Green Palace. This palace is a two-story building on an area of ? square meters. The most interesting part of this palace is the Hall of Mirrors with a seventy-square meter custom rug, woven in the famous Amoughli carpet-making workshop in Mashhad.

Master MirEmad Calligraphy Museum
This museum is laid in one of the historical buildings of Sadabad. Originally this building was the residence of Pahlavi`s children (Farahnaz and Ali Reza). It is a two-story building and its architecture belongs to late Qajar (1794-1925) and early Pahlavi era (1925-1979). Since 1997, it was used as the Calligraphy Museum of Master MirEmad, the most famous Calligrapher of Safavid dynasty (1501-1722). In this two-story museum, there are Collections of selected works of famous calligraphers of Iran's Islamic periods (from the 10th to 20th century AD) such as MirEmad, Mustasimi, Ahmad Neyrizi, Kalhor and etc.

Royal Costume Museum
This is the Shams Pahlavi's building (Reza Shah`s daughter). It is a mixture of Iranian and European architecture and was built by the order of Reza Shah during 1936-1940. Shams Pahlavi used this building as her summer residence, and then in 1964, she sold it to Mohammad Reza Pahlavi. During 1964-1979 this palace was used as a private museum of Pahlavi dynasty and then kept numerous antiques and royal gifts. After the revolution from 1995 till 2004 this place was used as the Anthropology Museum. Later in February 2010, it was converted to the museum of “Contemporary History and Royal Gifts of Pahlavi Dynasty”. Royal clothes of Pahlavi family (the queen, Mohammad Reza Shah, Reza Shah, and his family) are on exhibit in this museum.

Master Behzad Museum
This is a Qajar era (1794-1925) building and was rebuilt during the first Pahlavi dynasty, it was the residence and office of Reza Shah. Later, it was used as a summer residence of Reza Pahlavi (the former Prince of Iran) in his childhood, this building was called "the palace of the prince". After the Iranian Islamic revolution, in 1994, with the donation of his son some works of Master Hossain Behzad to the Cultural Heritage Organization, on the occasion of the centenary of this great artist, this building was inaugurated as a Museum Master Behzad. This museum features precious paintings by Master Behzad, one of the founders of contemporary painting. His ideas, opinions, and works have led to fundamental changes in contemporary Iranian art.